This online exhibition has allowed us to have an insight into the past of Korea’s embroidery. Allowing us to understand the transformation it has made throughout time, and see the stunning collection provided by Sookmyung Women’s University Museum to give us visual aid to appreciate the beautiful, intricate work. The exhibition takes us on a journey of traditional embroidery, incorporating traditional symbols, colours, designs and elegant details. Allows us to understand the divide in the Joseon period, of the rich and less fortunate just through the difference in embroidery. Resulting in an end point of modern and contemporary embroidery, and how Western culture has impacted this development.

Due to the Covid 19 pandemic, online exhibitions have become very popular, and this is allowing other cultures to be shared at such speed and ease. Allowing us to understand other people’s cultures and be enlightened by their traditions and norms. Online exhibitions are an amazing way to share information easily, however there could be a dispute about the experience of an in-person exhibition and the pictures shown within an online exhibition. You cannot physically see the intricate work, however at exhibitions it is rare you can get a real close look due to space restrictions, to preserve the work as much as possible. Therefore as long as the pictures of the work are high resolution it is a brilliant way to showcase the exhibition. Also, embroidery is so intricate and detailed it is a beneficial way to view the work. 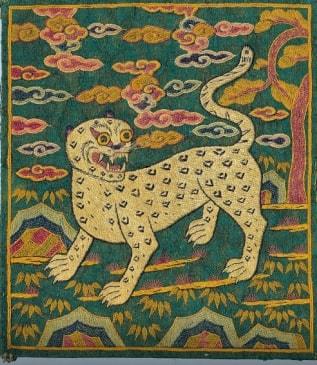 Starting off with the traditional embroidery theexhibition shows us Hyunbae which is also known as an Insignia, this is when a larger piece of embroidery is situated on the chest or back panels of clothing. This allows other people to be aware of the person’s hierarchy. For example, Civil officers usually have a bird on their design and a military officer is designated a four-legged animal. Like the two pictures shown here. This became an established way to categorise individuals after the reign of King Yeongjo. This has now developed to form a part of Korea’s national identity. All these were created in the Joseon period, which was five centuries long.

This is a beautiful example of the crane, as it shows the couched golden thread and amazing detail that has gone into these exquisite pieces. With small details of red seed stitch. 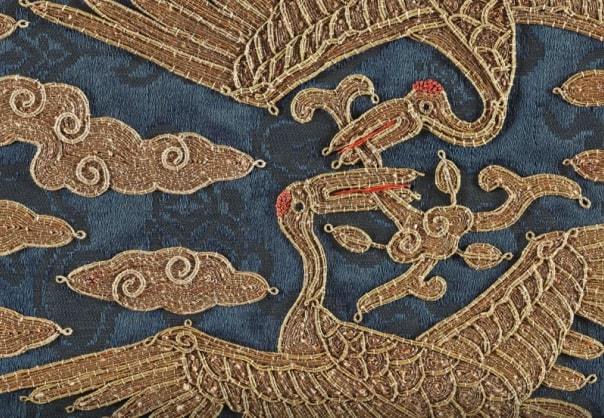 Traditional Korean embroidery was usually worn at high class events, such as this piece below. The Husu official robe is a piece of material that is worn from the waist down, and incorporates many different designs, within the Korean culture they have different symbols to represent different things. It was a way of expressing themselves in such a controlling period of authority. The more saturated the colours, a better representation of money. 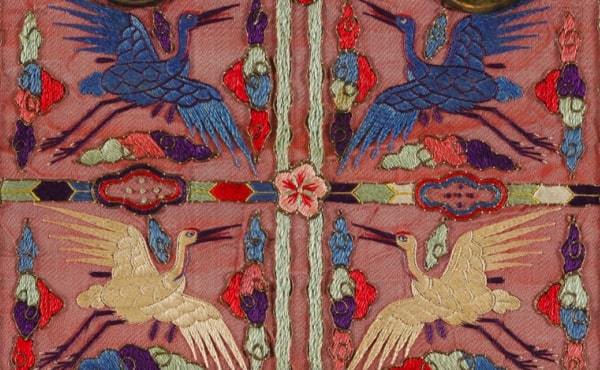 Some designs like the golden crane became a very popular design throughout history later on, however, to begin with it was just for the highest-ranking individuals. It was one of the most popular designs to filter through to the Western Culture influence. This is a beautiful example of the crane embroidered onto a Husu, using the direction of stitch to show the detail in the feathers and a stunning combination of stitch techniques. 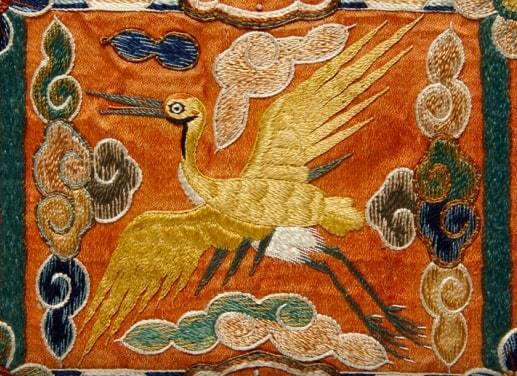 Within the royal court, there is the extended royal household, and embroidery was used as a pass time. Subang was their embroidery department and specialised in the production of their high-class embroidery. In the mid to late Joseon period, dragons were heavily used as authoritarian symbols. This is an example of one of the pieces made, a woman’s court robe. 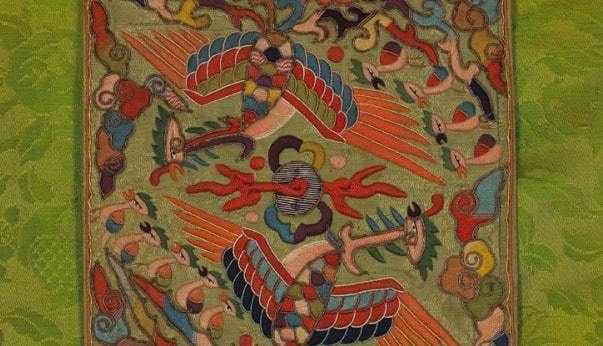 Gifts of embroidery were extremely popular in the royal court, the wedding of Queen Sunwon, an embroidered chest was gifted to her, incorporating ten traditional signals, which are also known as symbols of longevity. These symbols incorporated lotus flowers and mandarin duck designs, wishing the new married couple happiness and to bear many children. 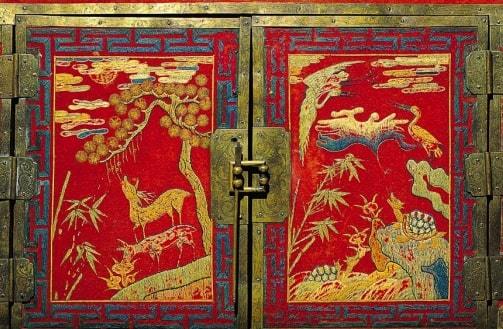 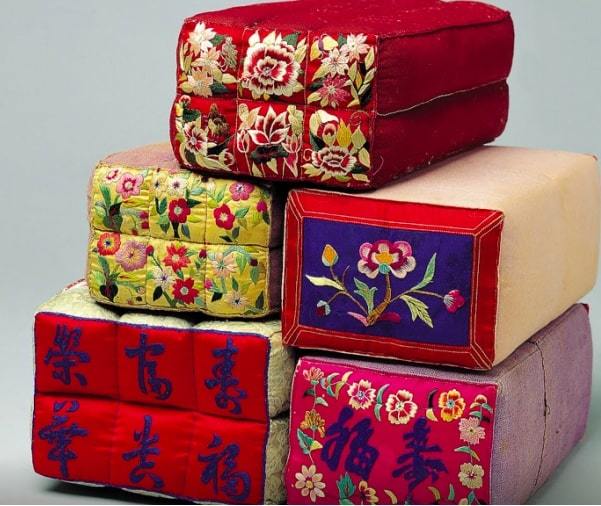 This type of embroidery was created by the general public, calling this embroidery Minsu. Making it easy to differentiate between Gungsu and the royal court embroidery. The women use to create designs for their husband and children, incorporating symbols which would hopefully make their dreams and desires come true. A lot of the designs incorporated the ten symbols of longevity. These designs were put on many different objects, like the pillow cases above, using silk shading to create the wonderful ombre effect in the delicate flowers. During the time of the mid-Joseon the rules were extremely restricting therefore embroidery was a type of escape, and the only free way to express themselves through design and colour. 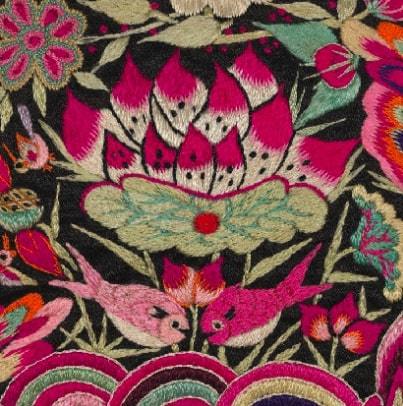 There are alot of hidden symbols in traditional Korean embroidery. This design I thought was wonderful, vibrant, full of life and intricate. As well as a good example of practical embroidery.

The meaning behind this design was that a lotus flower can grow in mud and dirt but always remain clean, therefore as a child grows do not let the outside world affect or influence you in a negative way.

Here are some more examples below, buttons, chopstick holders and glasses cases. 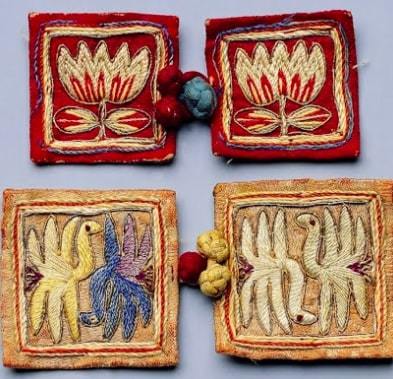 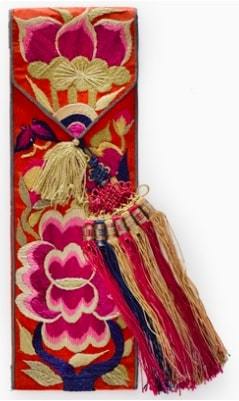 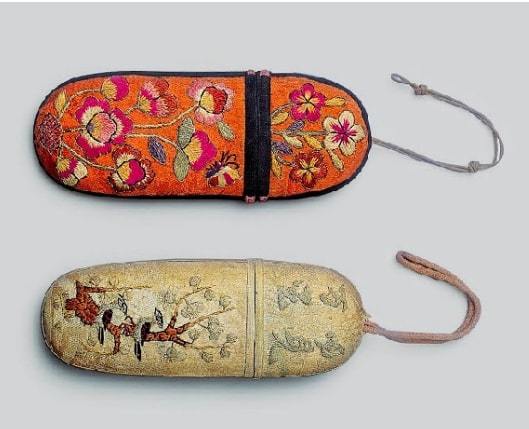 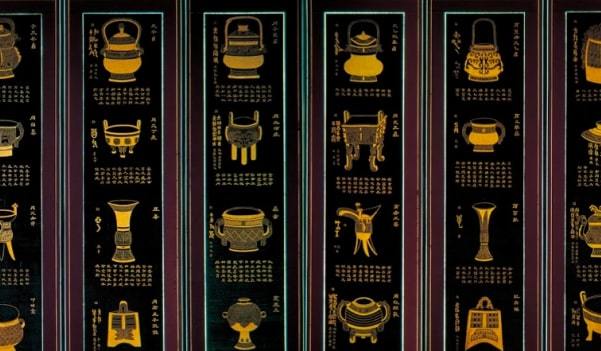 These folding screens were multipurpose. They were used to block wind, conceal spaces and used for decorative reasons. The embroidery on them made them look more luxurious, using the ten traditional symbols of longevity, birds and flowers, symbols of life and fortune. These were normally used by the upper-class families, or gifted to the upper-class families or the royal court. The traditional gold thread on black woven silk symbolises noble dignity. Like the example above.

One example was created by a group of males, from Anju, they embroidered a folding screen, which was in celebration of the King at the time. Which is the picture above. The picture below are some close up images of the folding screen, of parts I thought were particularly beautiful. As time progressed in 1945 upper class women across the globe had these decorative folding screens for changing and concealing themselves. 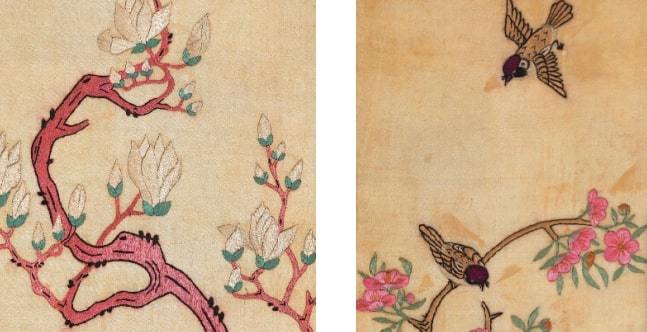 The period of enlightenment really impacted many areas of the world including the western influence, changing traditional embroidery. Education was at a turning point, girls’ schools were becoming more common, and embroidery was a skill that was being taught throughout many institutions. A particular girl’s school was established in 1938, Sookmyung Women’s School as well as the Department of Handicrafts to provide an embroidery education. This enabled skills that had been passed through families, and new skills learnt in the schools to merge and create new and exciting outcomes. 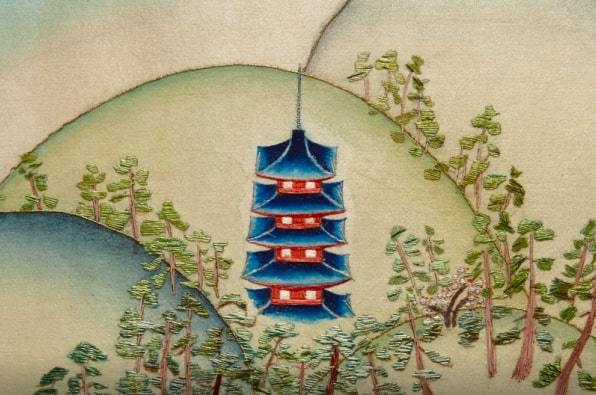 This piece of work embroidery with Landscapes created by Yu Han-gyeong in the 1940s. It shows how the Western culture influenced traditional embroidery, because there is an element of dye in this piece. Which would never have been traditionally used. Then added detail with the embroidered trees and house.

This was designed by activist Nam Gung-eok. 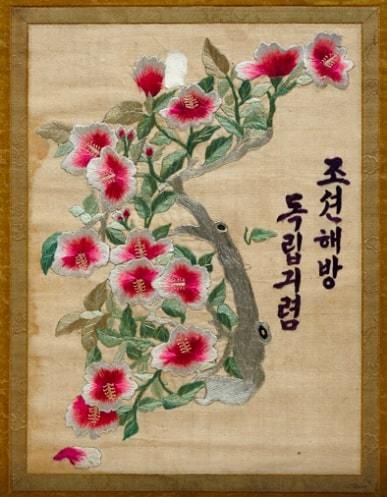 It takes the shape of the Korean peninsula through the branches and the roses. The thirteen roses represent the thirteen
provinces of Joseon. On this map embroidered on hemp cloth, there is a text that reads, “In commemoration of the liberation of Joseon.”

I also feel like the picture below is a good way to end this blog as it is a modern day version of the symbols of longevity! Korea has been on an amazing journey with its embroidery, and I hope you can appreciate it through this blog.

Thank you to Sookmyung Women’s University Museum for providing the gorgeous embroidery. 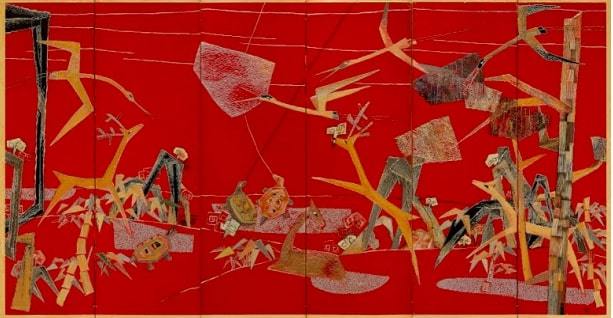