Every now and then, there is an exhibition that we feel we just have to see, and usually one holds out until it (hopefully) comes to London. However the risk of missing out on ‘Christian Dior: Designer of Dreams’ at Musee Des Arts Decoratifs was one that was too great and we felt compelled to go. So last month, Natasha made the trip to Paris to see the much hyped display. 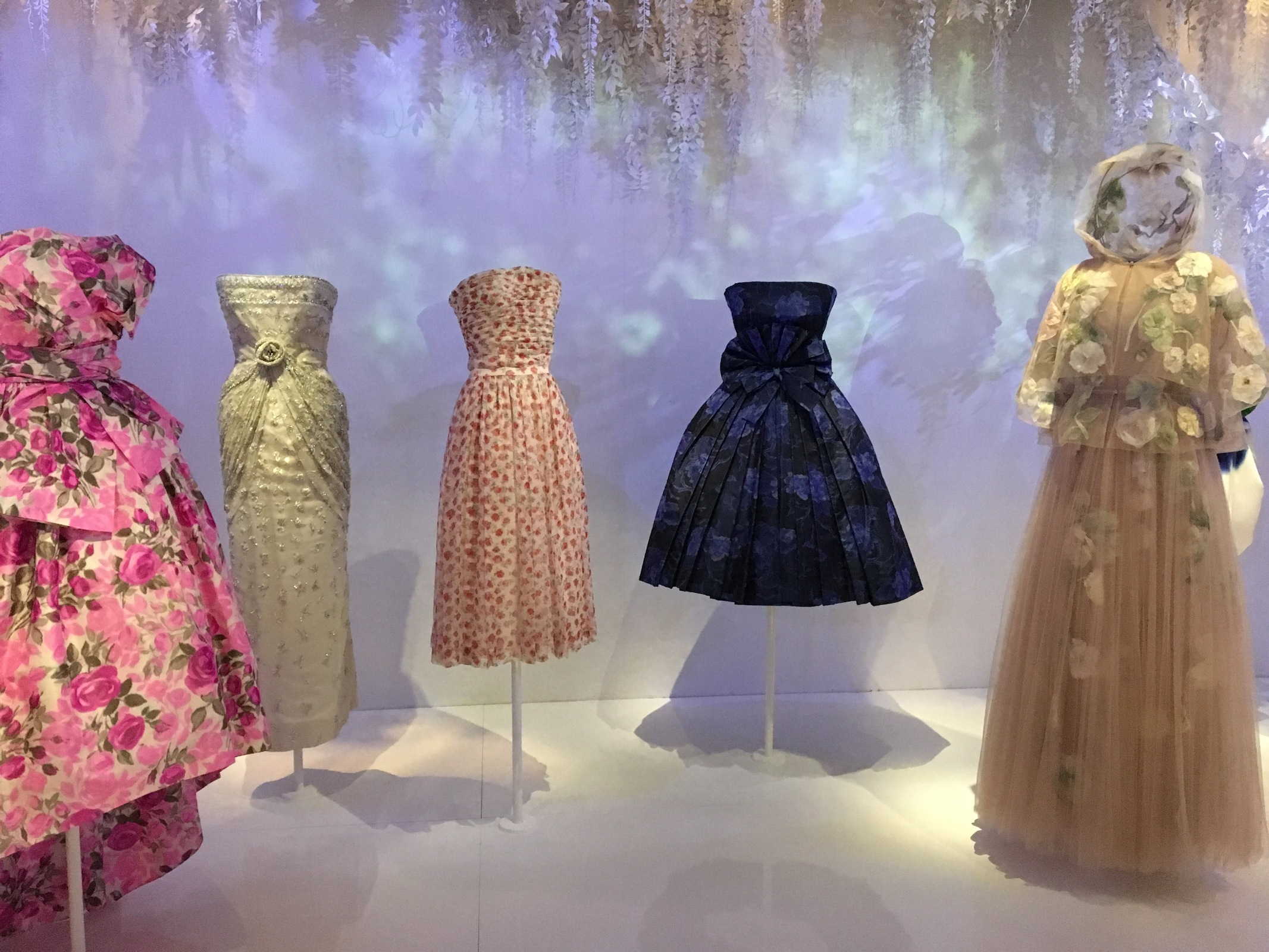 The exhibition begins with some history about Christian Dior’s family and his life before setting up the house as an art gallery owner and fashion illustrator. A brief introduction to the facets of the house it followed by the first main gallery. In this room, each section is divided by colour, each cabinate displaying a pallette with a variety of dresses, 12” minatures and accessories.

As an embroiderer, one of the most outstanding aspects of this exhibition was the level of detail you could see in the gowns and the emphasis that was placed on showing off the incredible textures. These were reflected in the papercut flowers and foliage that hung from the ceiling in a few of the rooms which were inspired by the fragrances that make up Dior’s famous perfumes.

Some of the textiles could be descibed as quite tradtional beading, whilst others would be considered to be more experimental, playing with feathers and layering but all were undeniably beautiful.

They also had an in house embroiderer demonstrating some tambour beading onto a panel of one of the gown and chatting with the public about what she was doing. The piece was framed up in a large slate frame, with one end complete and, the other drafted on. The drafts and drawings for the piece were hanging to one side of her with a partically completed gown on display behind her. The finished gown was part of the final gallery to put the whole process into context.

The white gallery was reminiscent of the layout of the Savage Beauty exhibition at the V&A museum in London where you were dwarfed by the pieces, however here the emphasis was placed purely on the cut of the garments. Each one is the toile of a gown we had already seen in the body of the exhibition to explain the development of each piece and the alterations process it has been through to get to the final design. 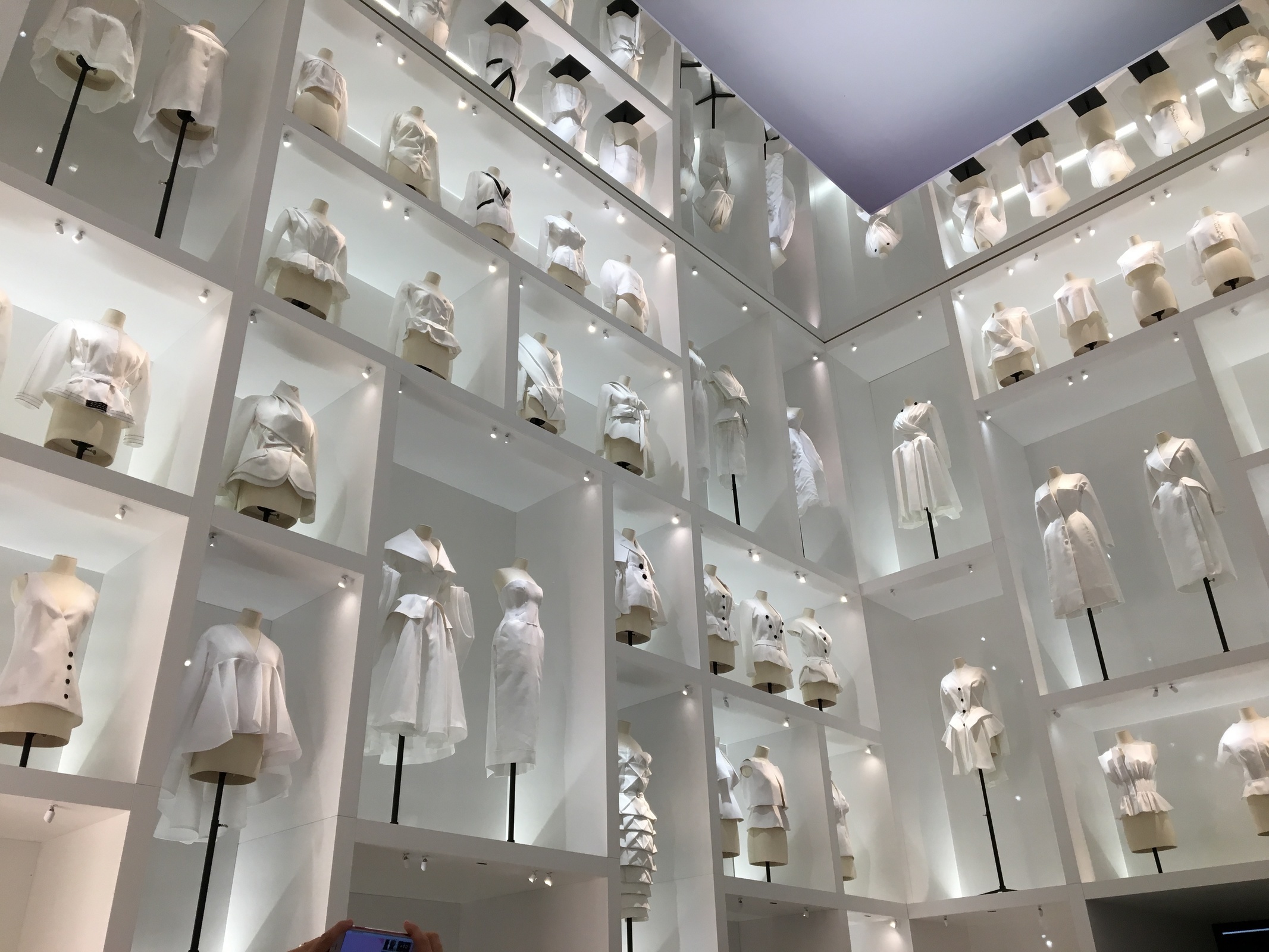 Final last gallery was all the real show stopping gowns, the space itself adds to the gravity of the items on display. They enhanced the experience with moving light displays across the walls which gave the impression of gold snow, unashamedly playing up to the couture fairytale.

It would be fair to say this exhibition was excellent, going around it all took at least 2 and a half hours going through it all but one could have stayed much longer. The amount of pieces on display and the generous space that was given to each one made it a very leisurely experience. I really enjoyed the way they played with scale in the lay out, starting off the with minatures gallery, then allowing you to get up close with the real sized pieces and then emmersing you in the white and final galleries.

If you would like to read another perspective on the exhibition, have a read of Tina Isaac-Goizé’s thoughts for Vogue here.

‘Christian Dior: Designer of Dreams’ is on show at Musee Des Arts Decoratifs in Paris until 7th Jan 2018 so catch it while you have the chance!

For those that don’t know Hawthorne & Heaney have moved into a fabulous new studio located in 14 Rathbone Place, Fitzrovia. A short walk from Tottenham Court Road station the new studio is spacious, airy and bright with 3 studio spaces. 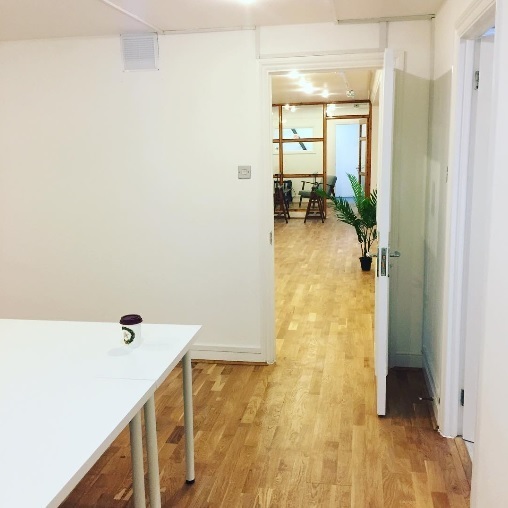 The studio now has multifunctioning rooms and our sister company London Embroidery School is using one of those rooms to host embroidery classes to learn techniques such as Goldwork and Tambour. Check out the website here to see what they have to offer: 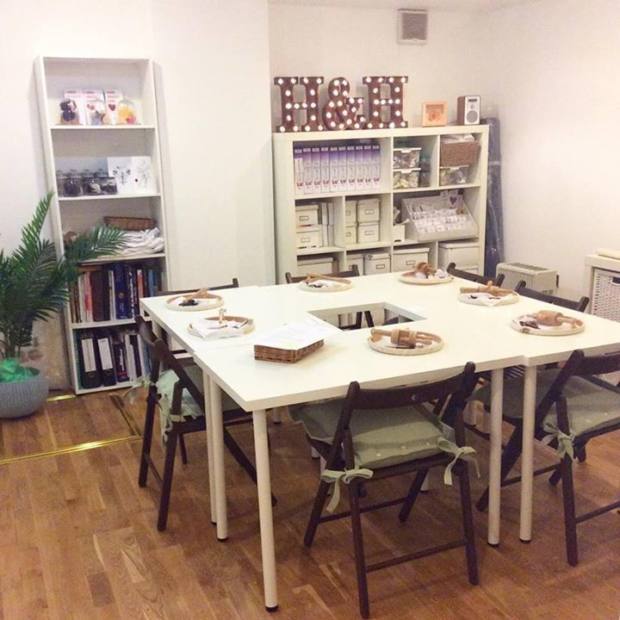 With such ample space we are able to be uber creative and this week our embroiderer Natasha has been working on creating goldwork inspired embroidery with a variation of metallic threads. 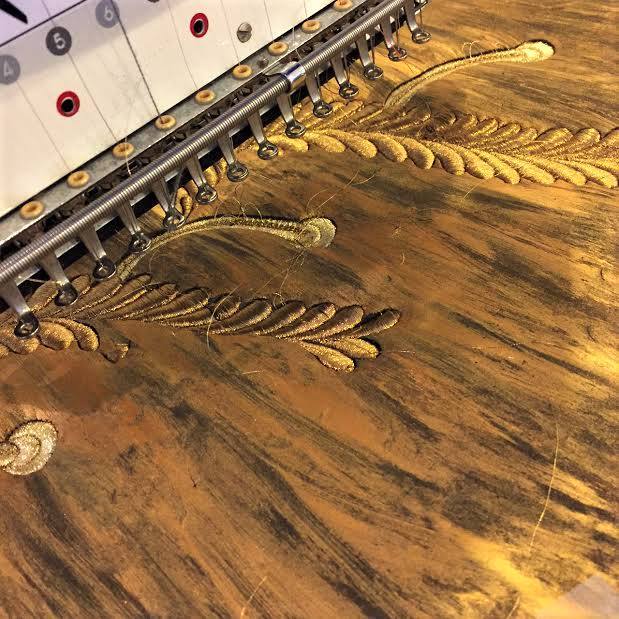 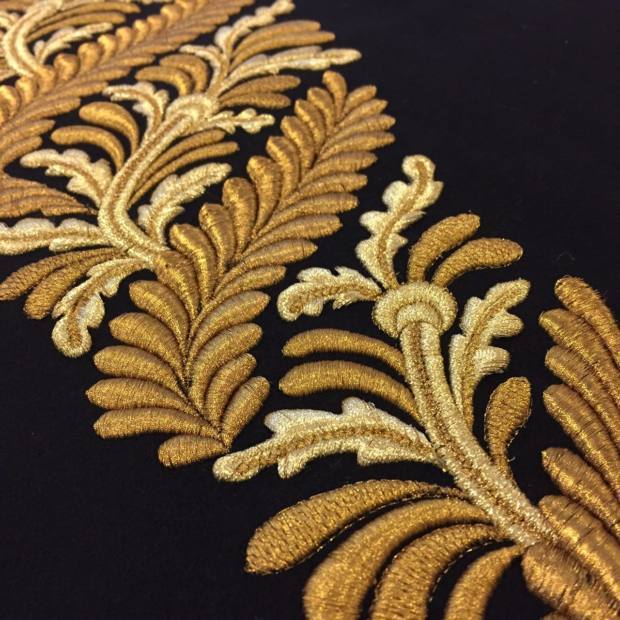 Throughout history Fitzrovia has been home to many inspiration creatives such as the English writer Virginia Woolf and Nobel Prize Winner George Bernard Shaw, whose famous playwright ‘Pygmalion’ was later adapted into an American musical called ‘My Fair Lady’ 1964. 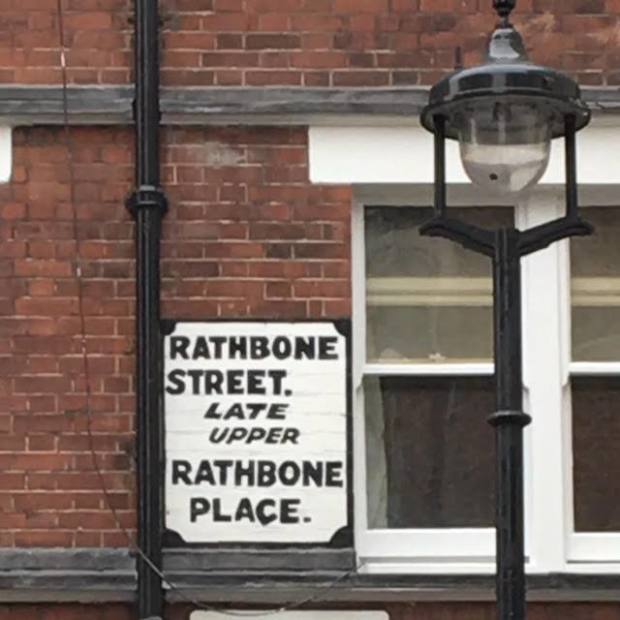 Fitzrovia is also famous for the local ‘Fitzroy Tavern’ located in Charlotte Street. In the 1920’s it became the hub for artists, tradesmen and intellectuals.

The latest big project in Fitzrovia has been the Great Portland Estates redevelopment of the former Royal Mail site between Rathbone Place and Newman Street. The site comprises 2.3 acres of land which will be created into a new public square with high quality offices, retail spaces and 162 residential apartments. Facebooks new UK headquarters will be located here.

It seems that we are in the perfect location for our craft! 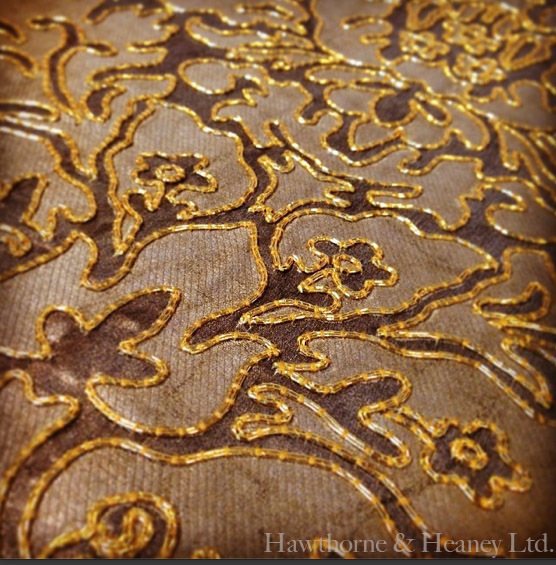 Hawthorne & Heaney like most advocates of an ancient art feels the need to make sure that we pass the skills needed to make these beautiful pieces onto the next generation in order to try and preserve the skills. Therefore, from April, The London Embroidery School will be moving into the Hawthorne & Heaney office in Mayfair on the weekends. 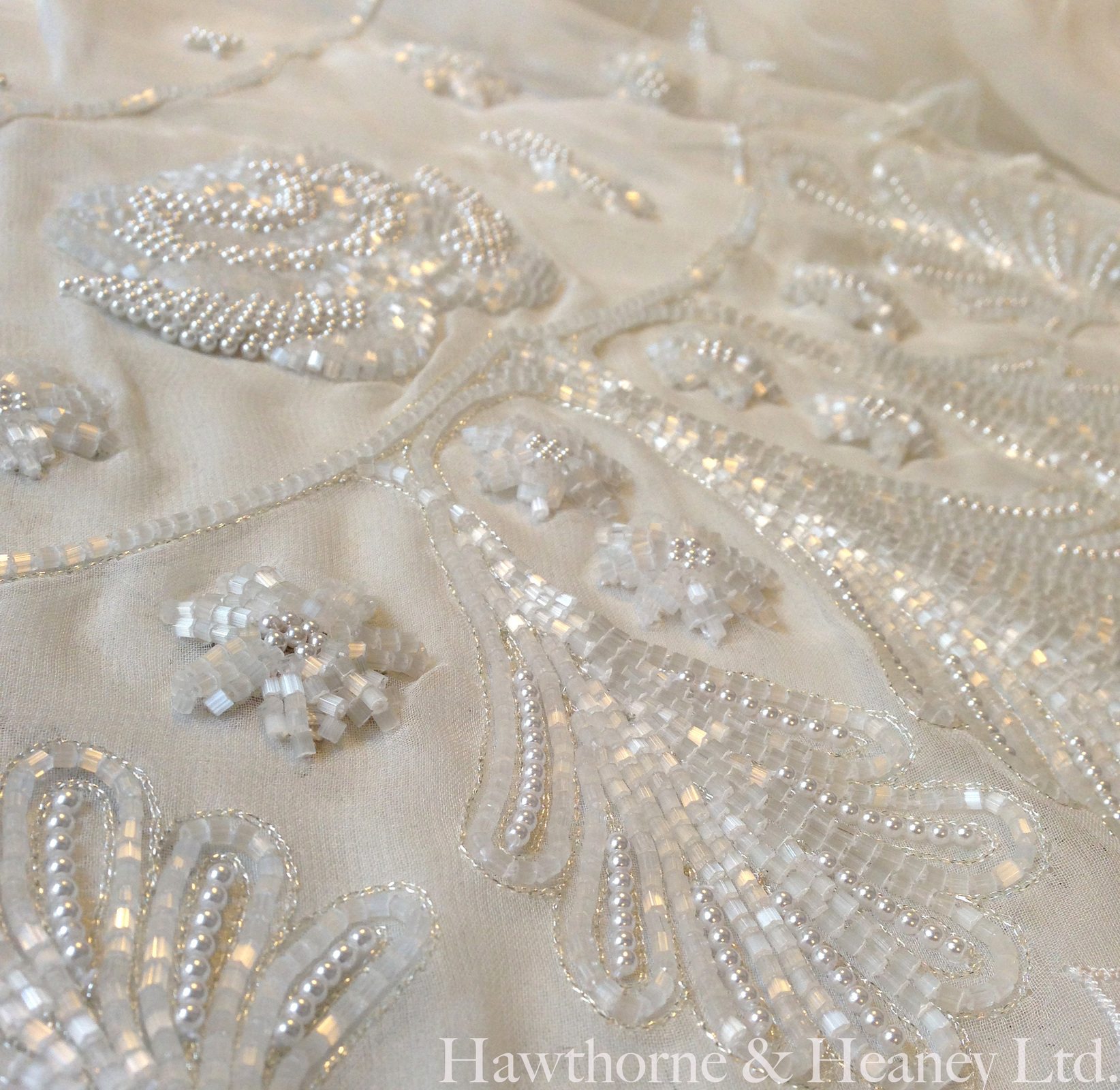 There is a range of the most popular classes that capture the essence of the work that we create available for the public to book and parcipate in. Couture Tambour beading, traditional military Goldwork and the much coveted and widely admired Lace Group are now available. So if you would like to dip your toe into Hawthorne & Heaney’s world, workshops from the London Embroidery School can be booked here. 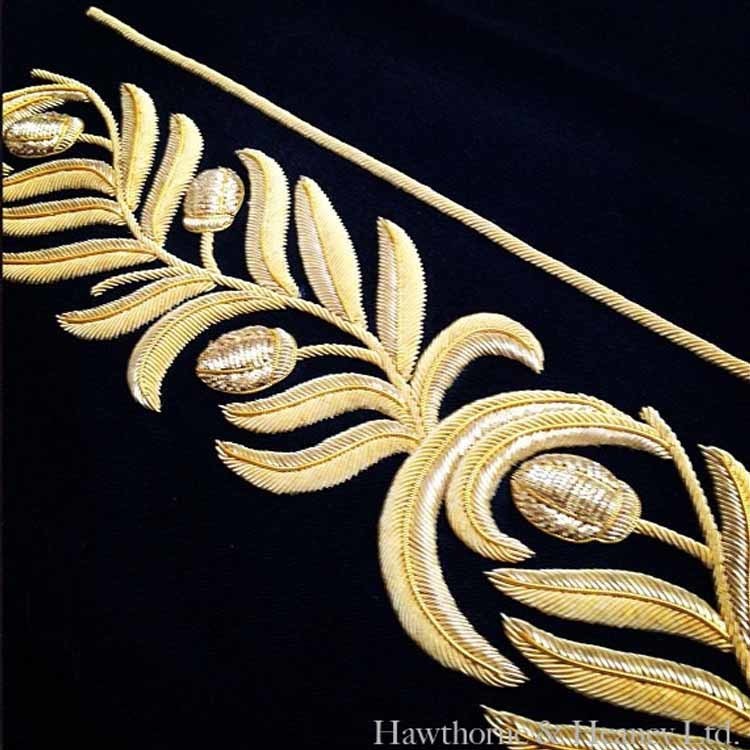 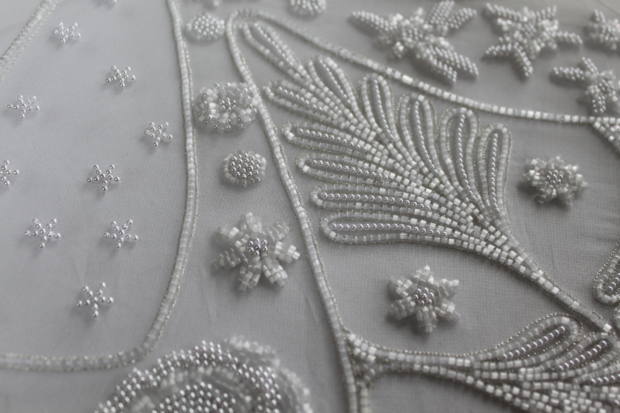 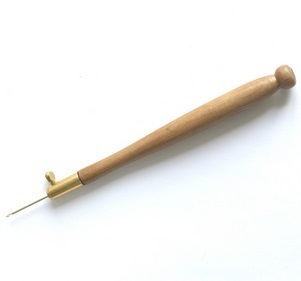 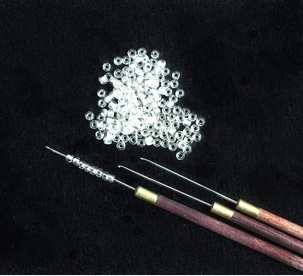 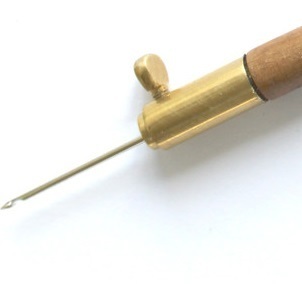 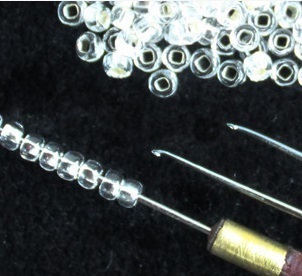 A few months ago we were approached by an interiors consultant called Jaye Pearce for a rather special project, her wedding dress. She had decided she wanted something different and being a creative person, decided that she was going to have a little more of a hand in what her gown would look like than just choosing it, she was going to design it.

This is the point where we starting discussing the possibilities for making her design a reality so Jaye presented us with a detailed sketch of the design she wanted for the top of her outfit which was going to be in a very sheer fabric with delicate beadwork. The design comprised of deco inspired fans complimenting the contours of the body, a scattering of stars and romantic cabbage roses surrounded by daisies.  The design had a quite whimsical nature with all its delicate components so to reflect this is was decided that the beads would be a combination of seed pearls and satin cut frosted glass beads in the traditional ivory tone. This was highlighted with very fine silver stitched details which offset the lining which was in a vintage blush pink.

Jaye has very kindly sent us some pictures from her big day where you can see the full outfit in all its splendour and so you can see the beading how it is meant to be seen.

And here’s the lady herself, congratulations to the happy couple for all the ladies at Hawthorne & Heaney!