‘A Girl Threading a Needle by Candlelight’ by G. Schalcken

The Wallace Collection is a hidden gem in London’s art history crown, which even this museum buff and lifelong Londoner has only just discovered. Set in a stunning 18th Century building on Manchester Square (just off Oxford Street) it is hard to believe it has taken this long to come across it. Housing some very famous works of art such as Hals’s ‘Laughing Cavalier’, Boucher’s ‘Madame De Pompadour’ and many Gainsborough’s there is plenty to see if you fancy a bit of an oppulent afternoon in the city. For keen stitchers, there are some stunning tapestry works as well as these 17th century wall hangings from Italy featuring lots of goldwork techniques. Now, until the end of August they have upped the ante a bit further by adding stunning couture shoes into the mix.

For a limited time the Wallace Collection is also displaying a selection of footwear superstar Manolo Blahnik amongst their artworks. Unlike many other fashion exhibitions, this is more of an intergration of the shoes in amongst the other art, they sit alongside the permenant collection (sometime on them!) in carefully arranged bell jars. This makes the exhibiton much more intimate as you feel you can get up close to all the pieces on display and all are treated with equal respect.

The selection of shoes in each room has been themed to compliment the artworks they are among. A particular favourite of mine was the oval drawing room where the most decadent shoes Blahnik designed for Sofia Coppola’s film ”Marie Antoinette” are shown amongst the sweet coloured room featuring Fragonard’s ‘Swing’ and Boucher’s ‘Madame de Pompadour’.

From an embroidery perpective there are a few pieces that standout as particulally beautiful. These boots ‘ Lepanto’ (Davee) 2003 look to be a combinations of hand painting and embroidery to a very rich effect.

Of course, there are beads so we couldn’t not mention ‘Zarina’ 2015 which are the very definition of encrusted.

Downstairs is a wall of the original sketches for shoes on display upstairs, showing Blahnik’s distinctive style and flare.

Overall it has all been very respectly done. It is clear from the selection that Blahnik is passionate about beauty and craftsmanship with many skills shown in his designs and revisited throughout the years. There is not much information on each of the pieces, a simple sticker of each one’s name and year leaves you with a few questions perhaps, but lets you enjoy them uninterupted.

‘An Enquiring Mind: Manolo Blahnik at the Wallace Collection’  is on until the 1st Sept 2019, Entrance is free.

During a recent visit to Singapore, one of the team at Hawthorne & Heaney took a sight detour off the tourist trail and visited one of the Peranakan Embroidery heritage boutiques in the suburbs. This small street houses a couple of shops in which they are keeping the more traditional embroidery techniques of the region alive. One such place is called Rumah Bebe which is lovely in itself as it is covered in patterned tiles and gilded woodwork. They house a wide range of Nyonya garments such as sarongs, embroidered jackets and beaded shoes. As is fitting to the work that has gone into them, the pieces are quite pricey, but well worth it for how lovely they are. 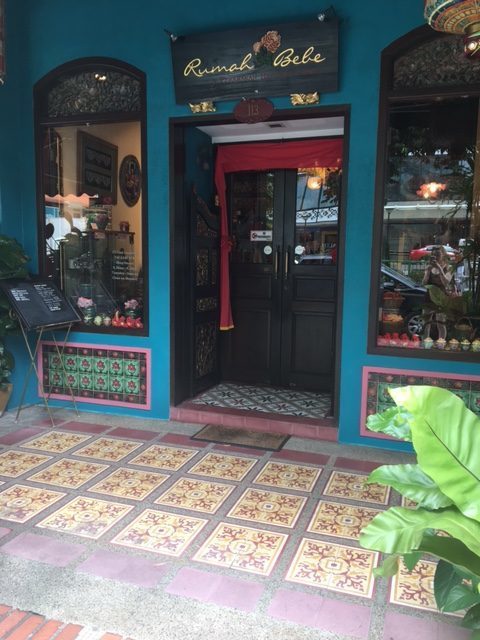 Kim Choo Kueh Chang is also next door where you can sample traditional Nyonya cakes from the cafe downstairs made with coconut, condensed milk and pandan leaves which gives them a bright green colour. They have a little shop of trinkets but upstairs is where you will find the best bits as they have a range of embroidered pieces which line the walls and a variety of vintage items on diplay in their exhibition. They explain a little of how the embroidery is intergral to the wedding services of the culture with the examples around for context. 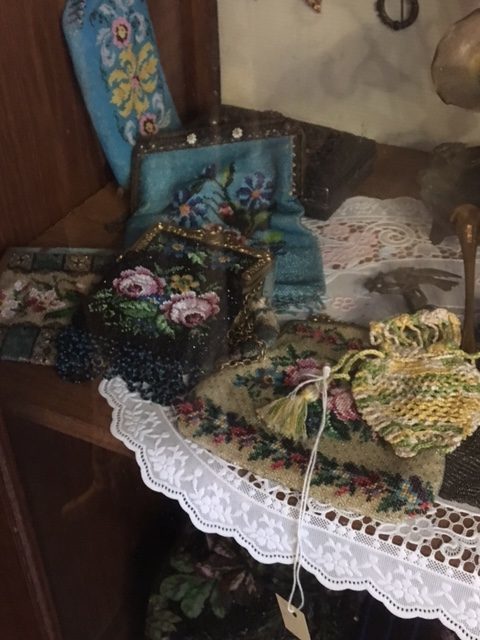 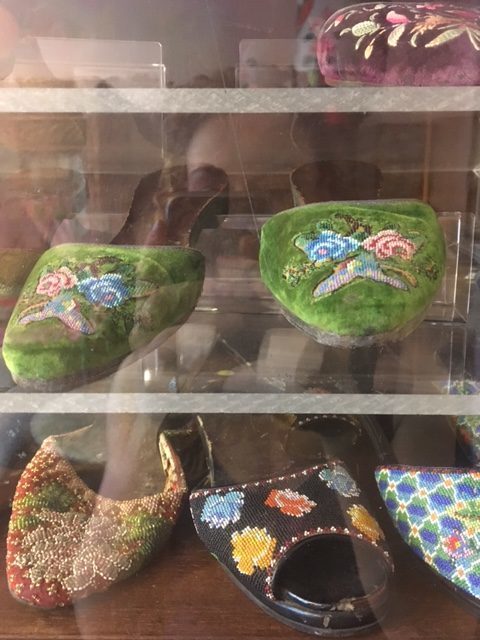 A personal favourite had to be this part completed design, still on the frame which demonstrates a little of the technique that is used to create these pieces and the scale of the beads that form the designs. 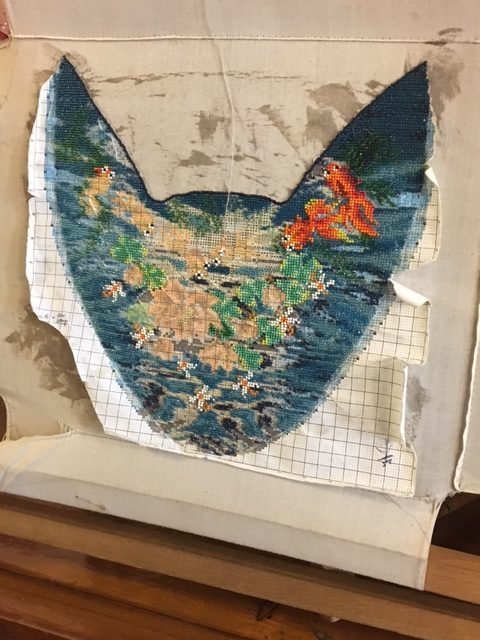 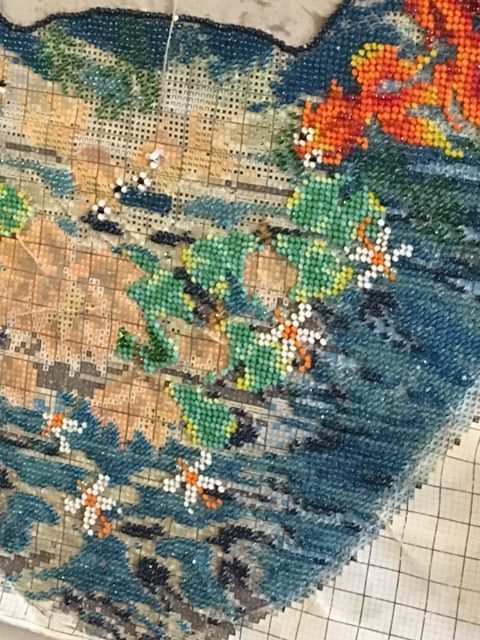 To see more of what they have to offer, visit their websites above or watch the video below for a glimpse of the action.

It is always wonderful to see what culture and history London has to offer and at the moment, the British Museum has 2 exhibitions on that will be of interest to anyone whole appreciates textiles. Following on from the very sucessful ‘Fabrics of India’ exhibition, they have the ‘Krishna in the garden of Assam’ piece. Also showing now in the main collections are a range of Islamic Footwear some of which regulars may recognise from the ‘Shoes: Pleasure & Pain’ exhibition.

Krishna in the garden of Assam the cultural context of an Indian textile:

Currently on display at the British Museum is the ‘Vrindavani Vastra’ (cloth of Vrindavan), which is reported to be the largest surviving example of an Assamese devotional textile. Made from woven silk, this beautiful textile depicts the Hindu god Krishna and his life in the forest of Vrindavan. Produced circa 1680, and measuring over 9 metres, the textile features both imagery and text demonstrating the highly skilled and most unusual weaving techniques that must have existed in India at this time.

The Banyan gown pictured below is made of Chinese floral damask with a lining that is also made from pieces of similar Vrindavani textile woven sometime between 1550 and 1800. The re-use of such textiles in items of clothing has helped to ensure their survival today although sadly the weaving techniques that produced them have since been lost.

Alongside the other exhibits, including masks, garments, and manuscripts, a short introductory film and an exciting video artwork combine to build a picture of late 17th century lndian history and of Krishna worship.

The exhibition Krishna in the garden of Assam is at The British Museum 21 January – 15 August 2016. Admission is free.

Life and Sole: Footwear from the Islamic world

Also on display at the British Museum is the Life and sole exhibition, in which footwear reveals an intriguing insight into the historical, as well as current, social and cultural aspects of life in Islamic countries.

The display features shoes and footwear of different styles, materials, and production techniques, dating from circa 1800, and originating from North Africa, the Middle East, Turkey, Central Asia and South Asia.

From stilted bath clogs for bathing, to beautiful hand embroidered red leather wedding slippers, the display tells a story of people and their lifestyles and demonstrates the influence of politics and international trade on the fashion of footwear.

World renowned for its calibre of art and design exhibitions, the V&A’s Shoes: Pleasure and Pain Exhibition was no exception to the museums prestigious reputation. As the title implies, the exhibition housed an amazing array of shoes for men and women from all over the world, ranging from Egyptian times to modern day. 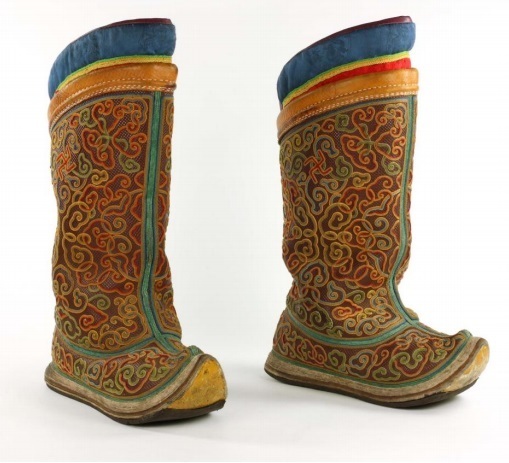 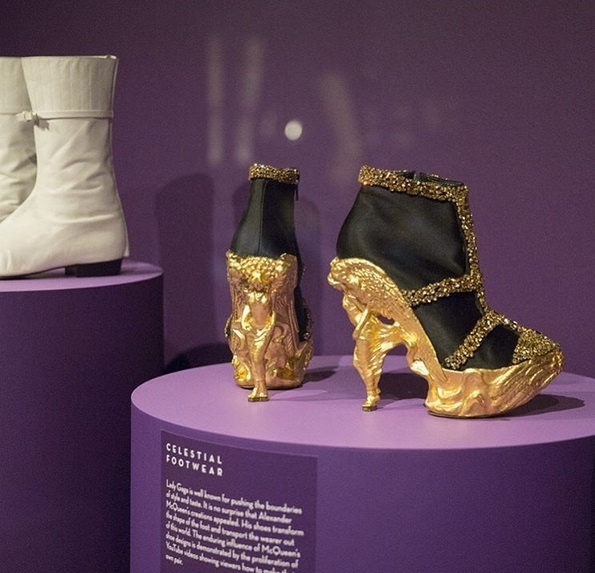 For any embroiderer there is lots there to capture your interest and ogle though the glass at such as the silk work on these 19th Century Lotus shoes, to the classic beadwork on the 1958 Christian Dior pumps. 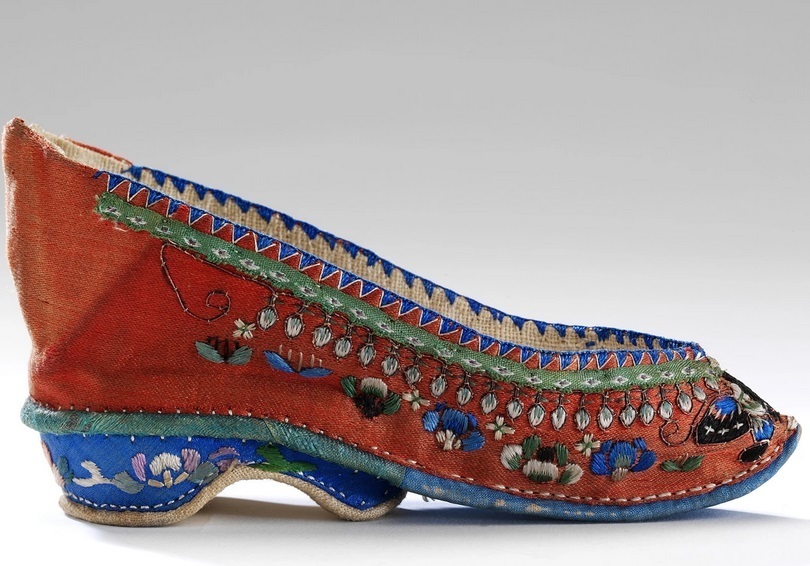 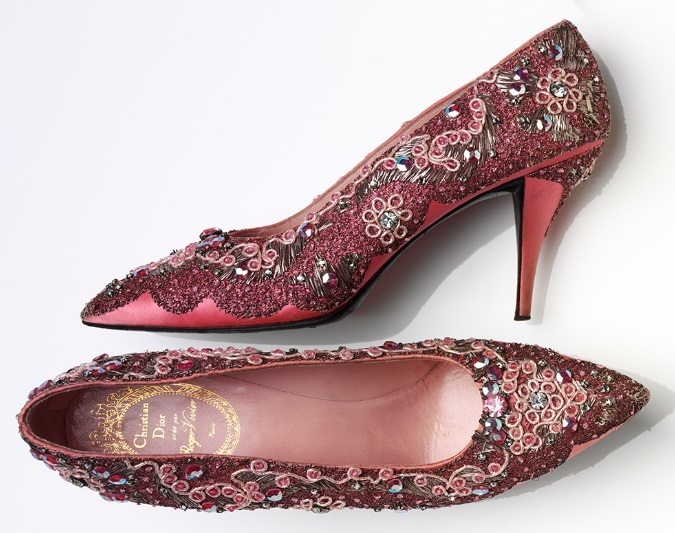 There are also some great example of goldwork in the exhibition which demonstrates golwork’s uses aside from in military pieces. These examples are both from the shoes as a status section which is unsurprising given the skill and time necessary to create pieces of this quality. Below: Gold Mojari  covered in goldwork (1890) and Pale Blue Heels, with silver lace and braid (1750’s). 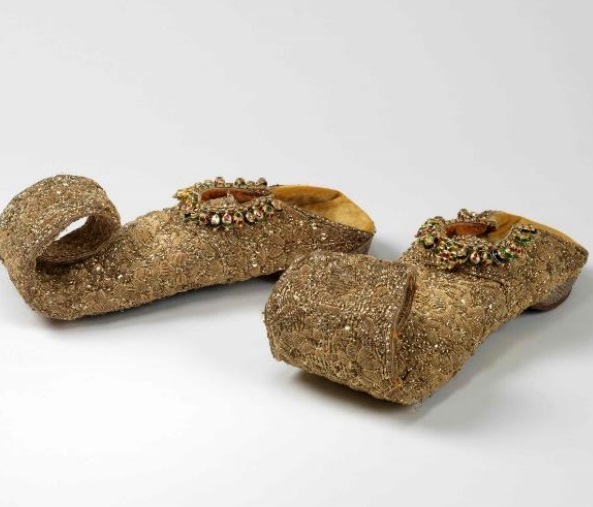 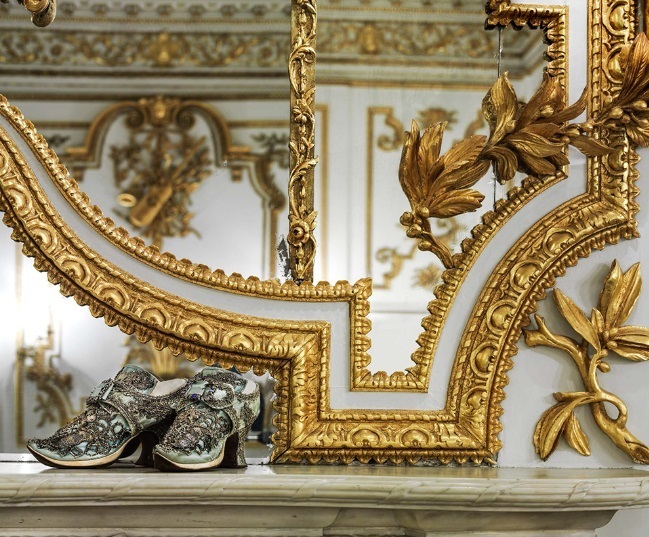 Along with the shoes themselves, the exhibition also covers other aspects relating to shoes as well such as the making and collection. Projected onto the dome of the building a video takes you through the making of a bespoke shoe , that gives you a behind the scenes view of one of our customers, Foster & Son. Watch the video below for a taster of the action.

Other videos throughout the exhibition brought the shoes to life, to show how the wearer would walk in them and the sounds they would make. This is most noted in the few pairs of Japanese ‘Geta’ (1880) shown where the wearer has to balance on one foot and swing the other foot across the floor in a half circle motion in order to take a step, more like a dance than a walk. 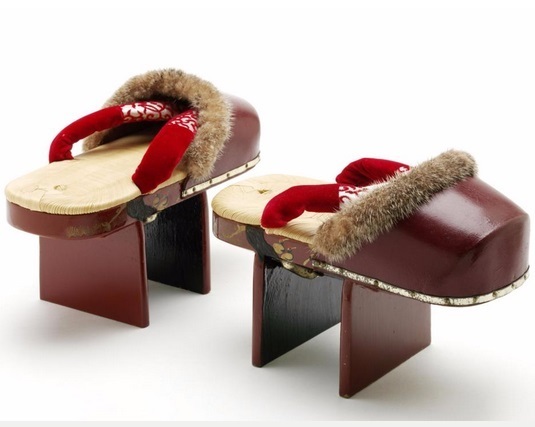 It shows the break down of what goes into making a shoe from designing the heel and arch shape which can be seen below to all the pieces that go into a shoe and how they come together as a functioning object. Above those pieces you can also see some embroidered uppers which helps to explain the shoe’s shape and the poitn at which is is possible to embroider them before they are put together. 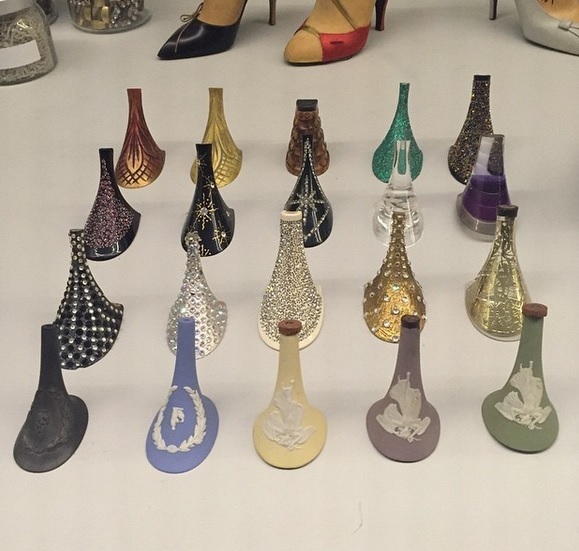 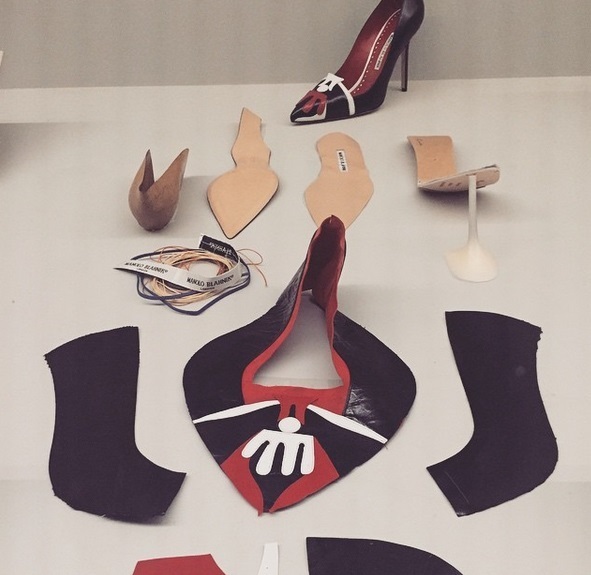 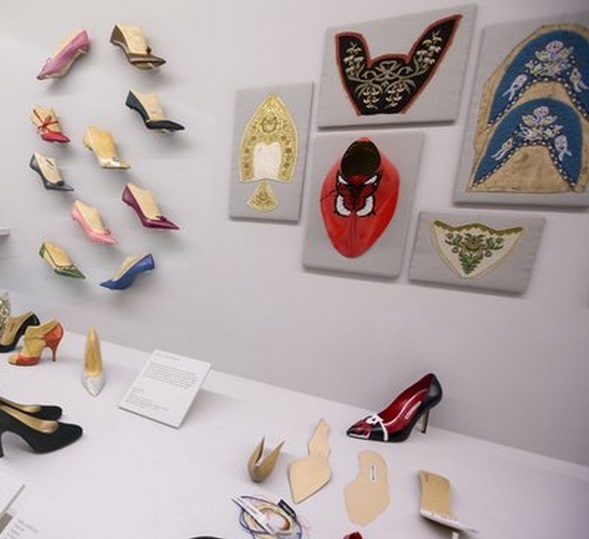 All in all there is plenty to see and we would encourage anyone with an interest in embroidery or shoes to go and have a look while you can as you never know what might be the key to your next inspiration. The V&A’s Shoes: Pleasure and Pain exhibition is on now until 31st Jan 2016.