During her time here, our last intern Florence Sargent visited the Royal Academy Summer Exhibition 2019 for her research project, where she was briefed to create a sample based on the Summer Exhibition including 3D aspects. She became increasingly aware of how much reference there was to the animals of the world and nature throughout the art. This year the colours were bold and capturing and this was something Flo wanted to reflect when it came to sampling.

At the exhibition, she began by taking photographs to capture her favourite pieces, most of which included animals with an unusual look or aspect to them – bright colours and interesting faces. This sense of the individual and different, she has taken through to her final samples. 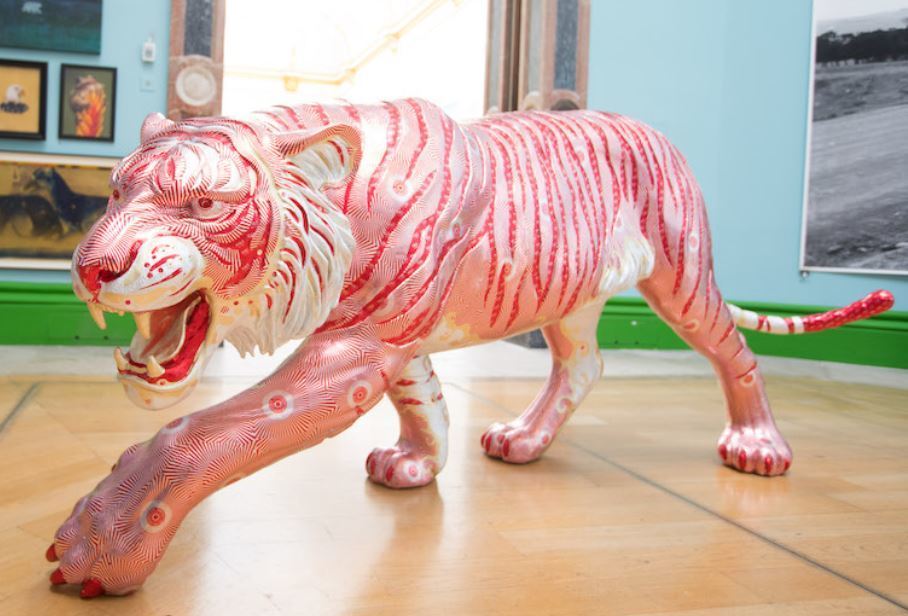 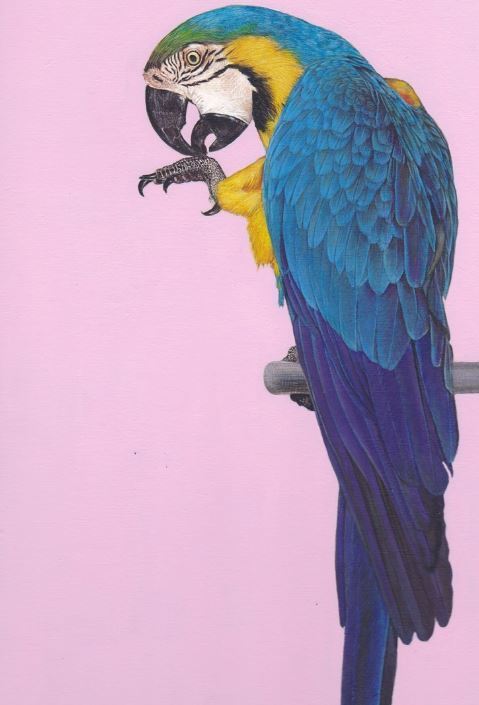 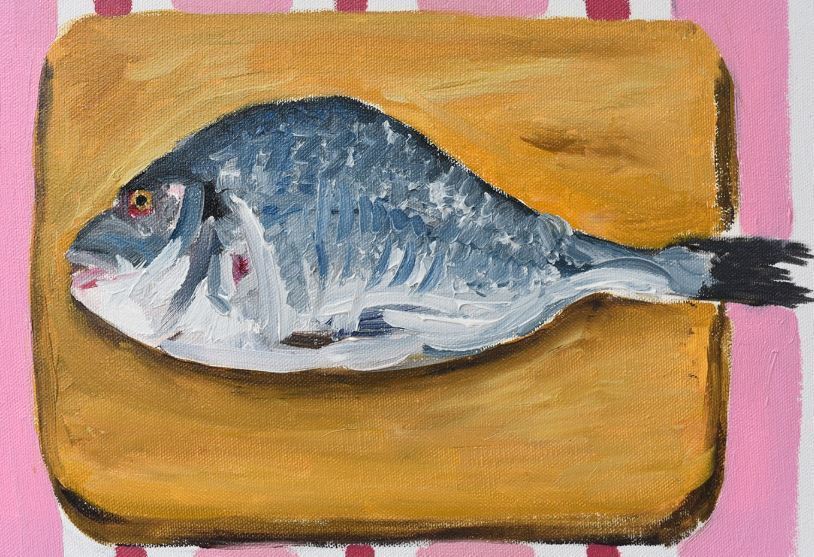 After visiting the exhibition and writing a blog post about her time there, Flo began her development by creating lots of drawings. She has created some really beautiful and realistic work using only pencil and shading. 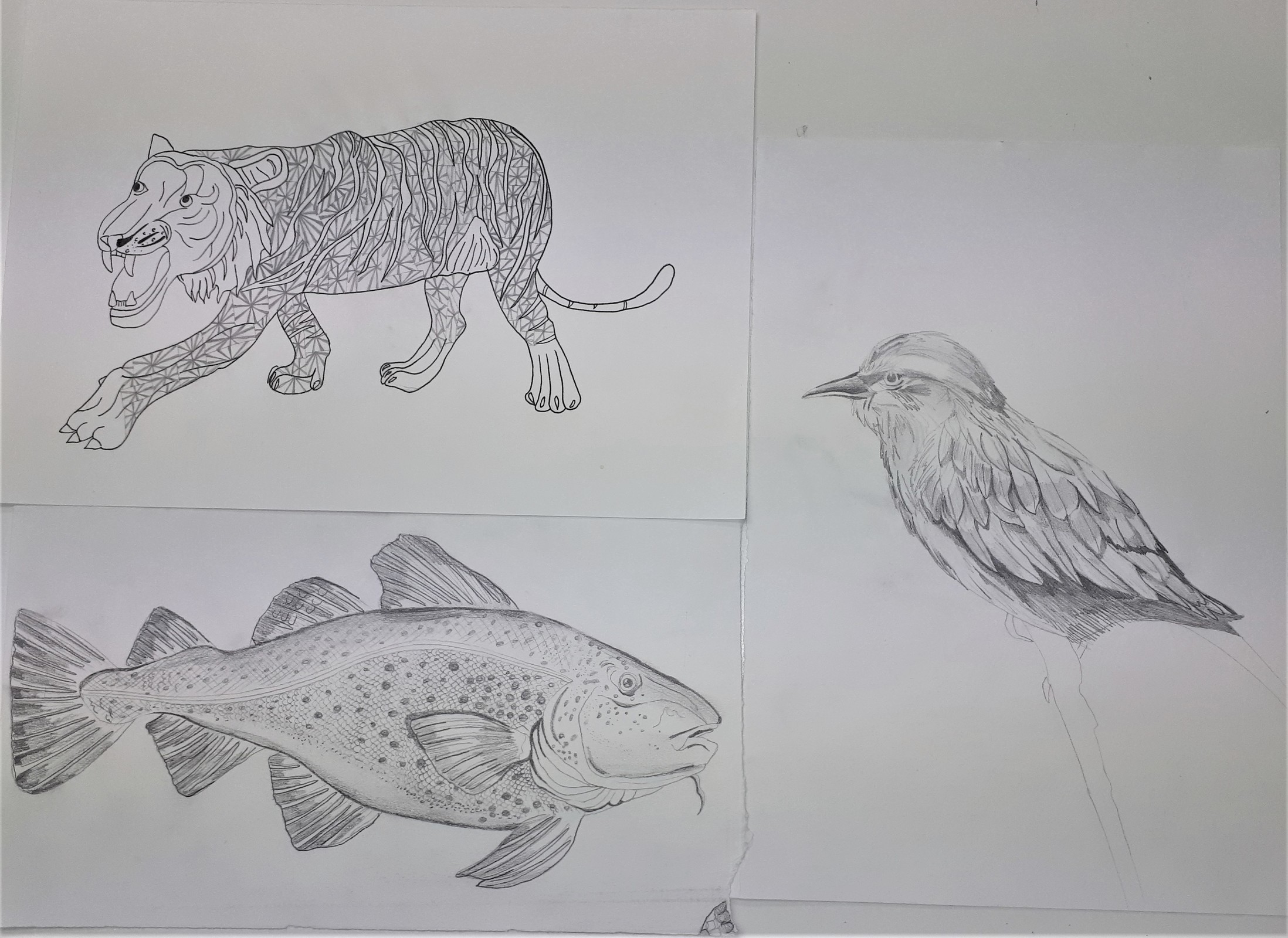 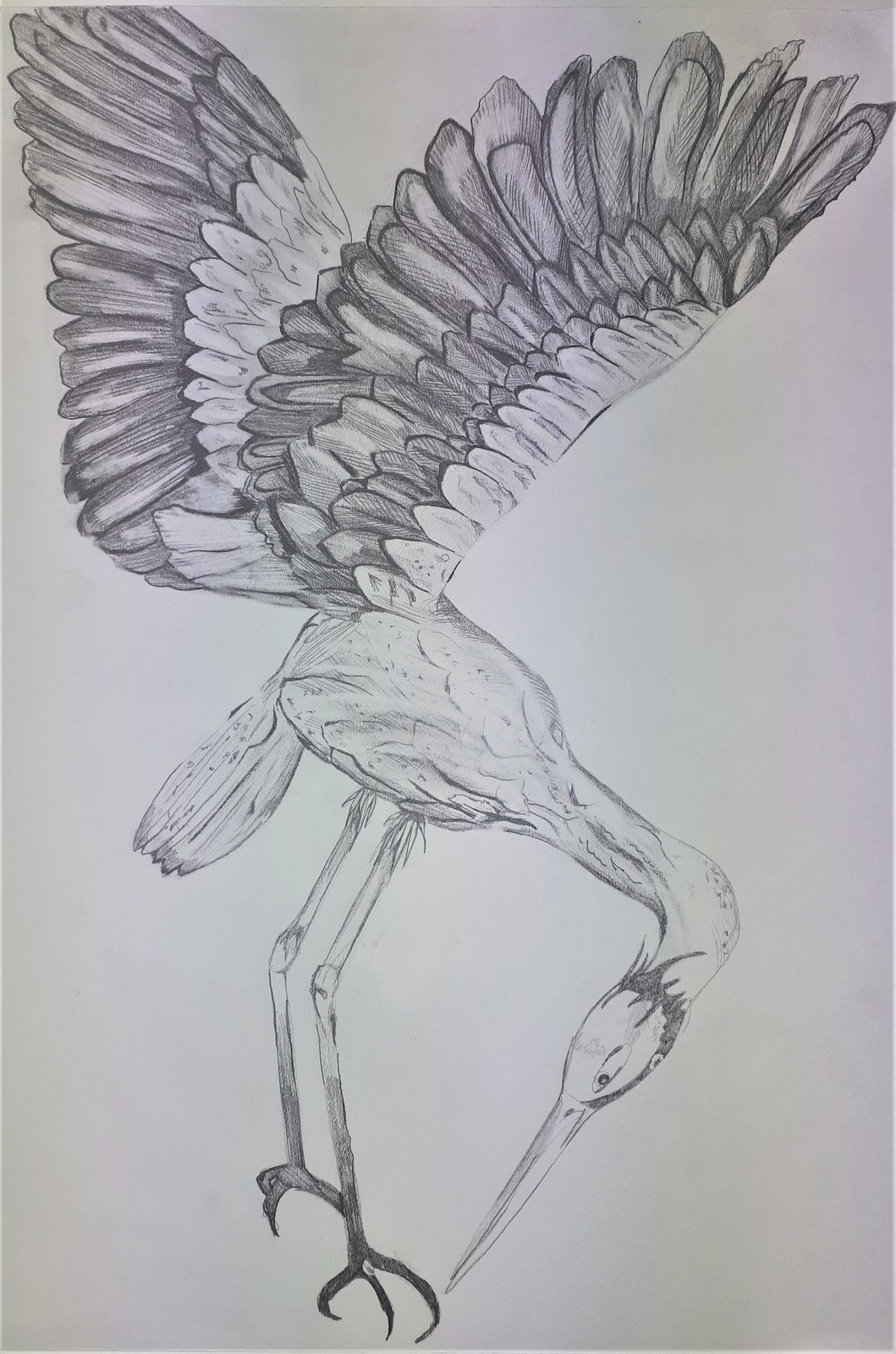 To develop further Flo began to turn her flat drawings into 3D artworks, using stitch alongside cutting and joining techniques with glue and tape. These gave her work more of a 3D focus and gave her some ideas as to how she could put together and join her final piece to include these 3D effects. 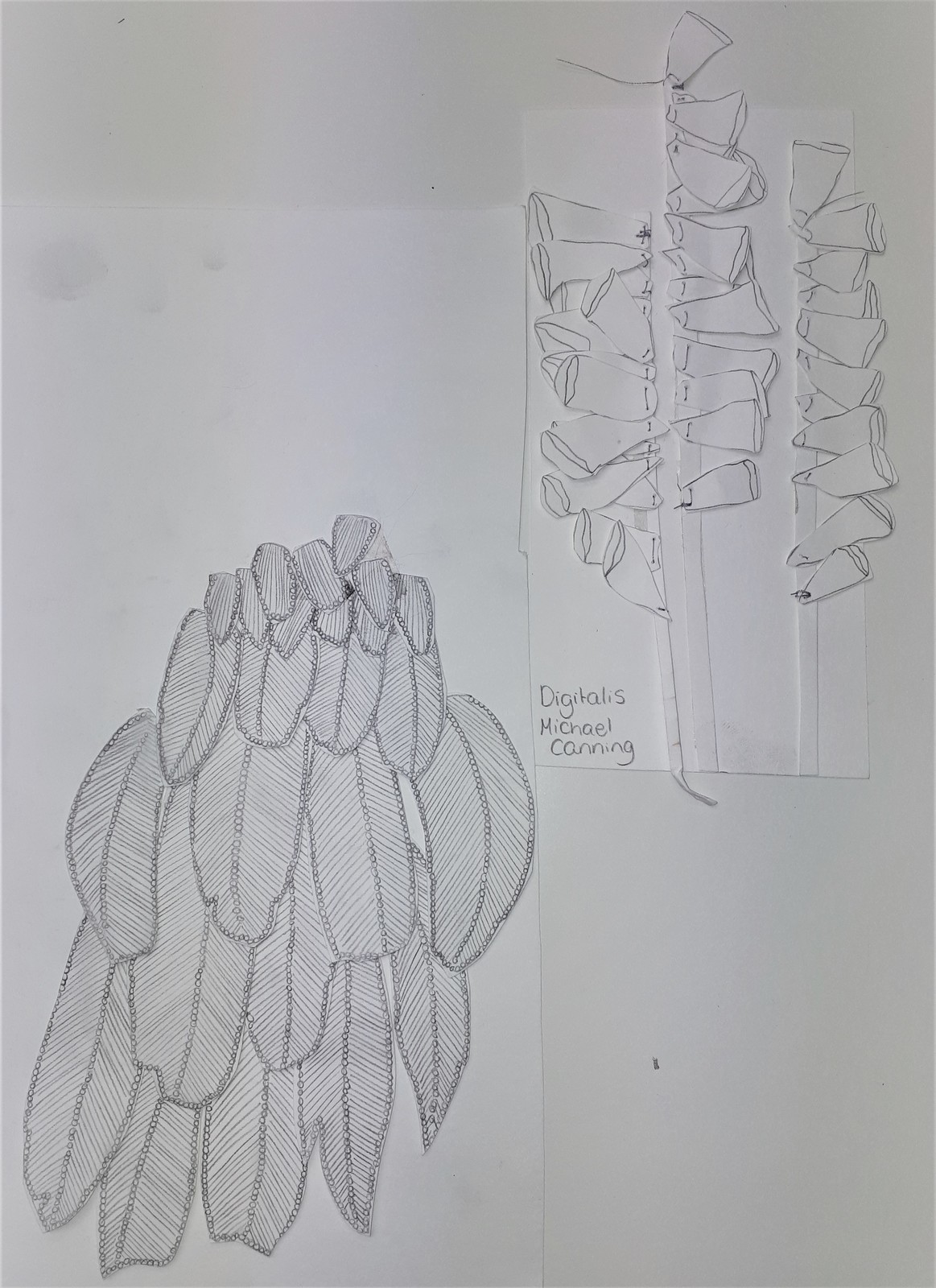 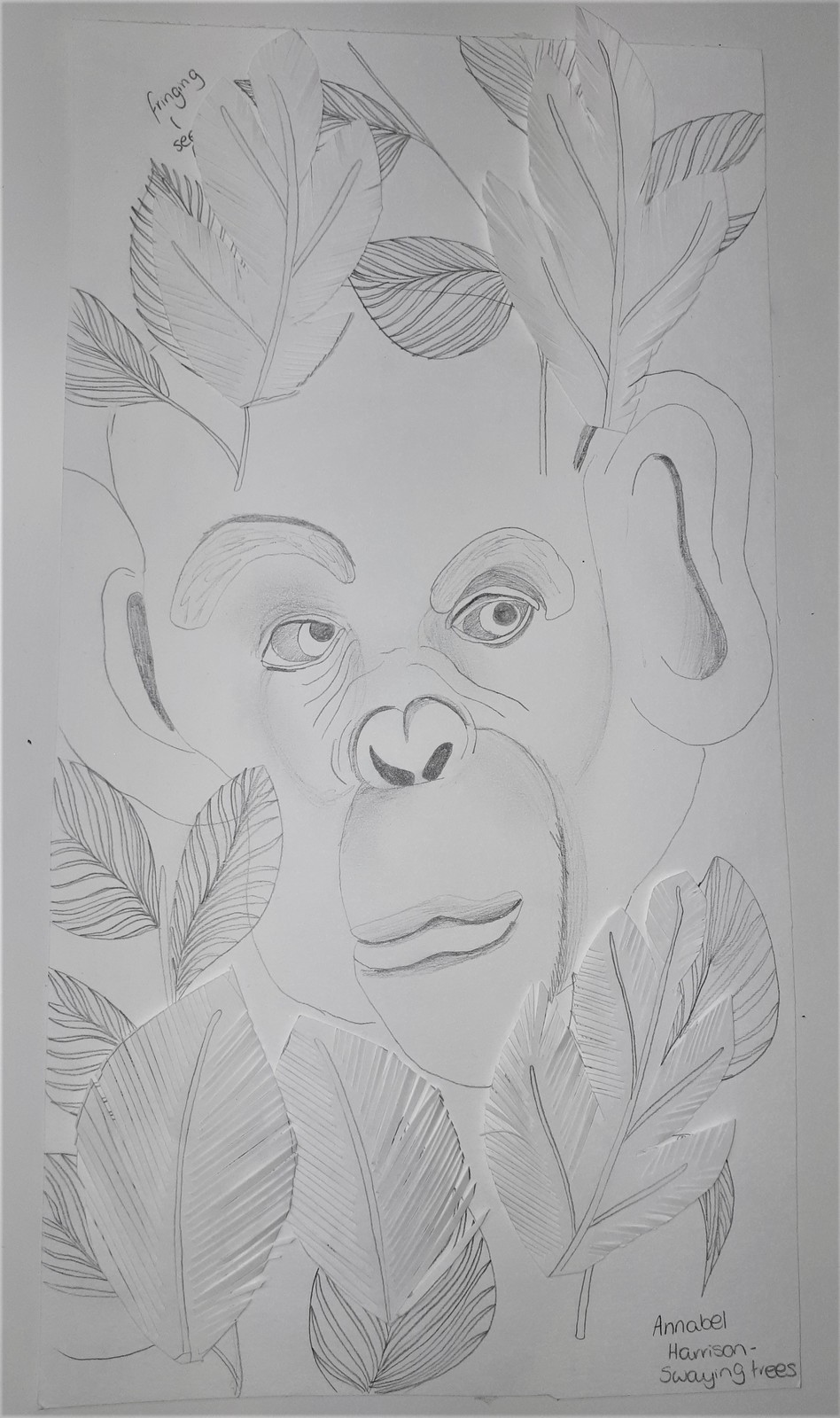 Flo moved on by adding in more character, using bold colours combined with her 3D style, and experimenting with mediums such as paint, pen and pencils mixed together to give her work a bit more life. 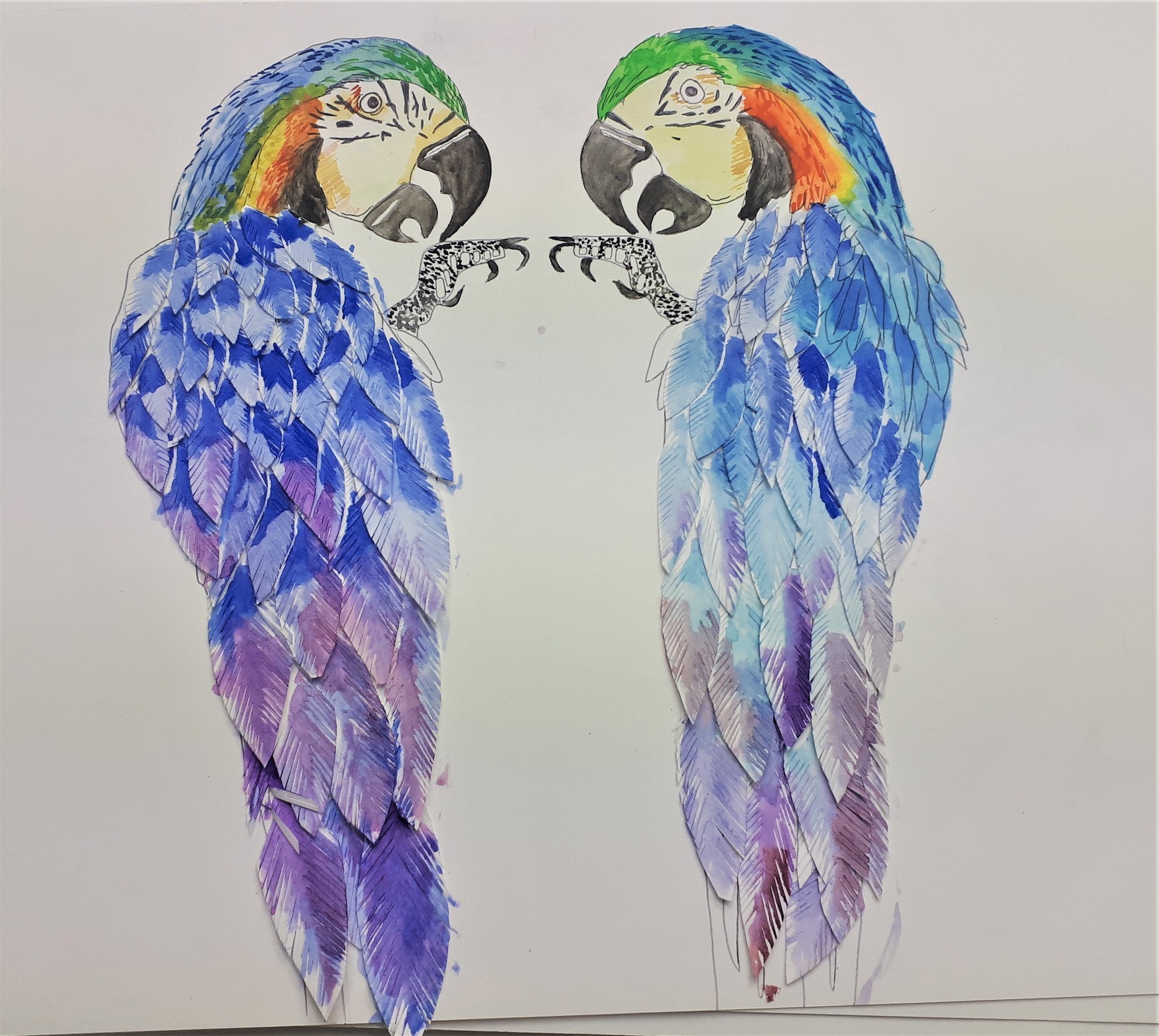 Then when it came to actually beginning the sampling process, Flo decided to start with a simple line drawing plan, laying out all the techniques and shapes to be included when it came to creating. This really helped her final piece come together as a success.

You can see here, she has decided to combine 2 of the most popular animals seen at the RA, a fish and a bird combined, to create her own fantastic creature. 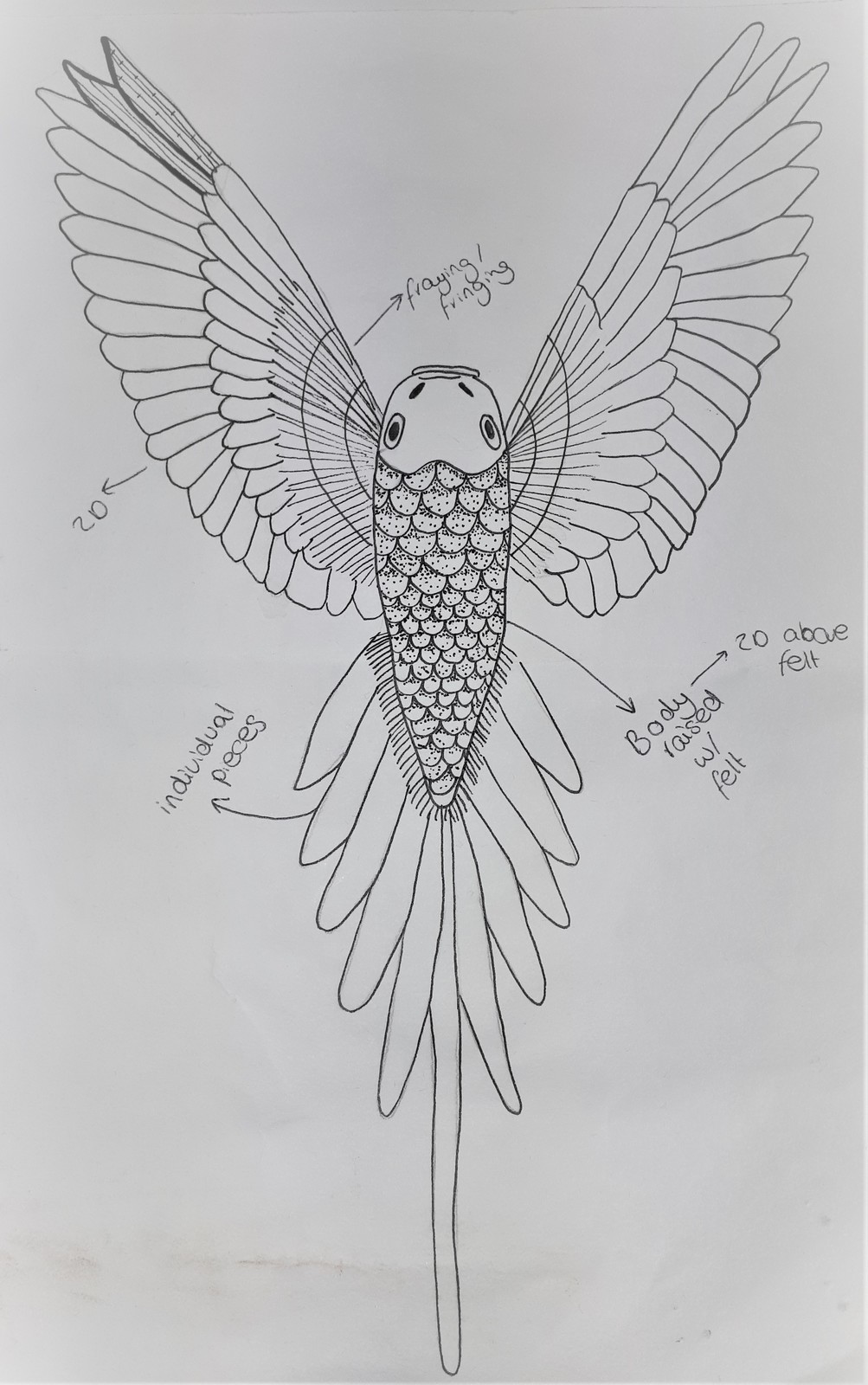 Finally Flo took both the Goldwork Beginner and Tambour Beginner series of classes and learnt the basics of both practises. With some time blocked out for her during the weeks at Hawthorne & Heaney, she was able to practise and build on these skills to create her final pieces. 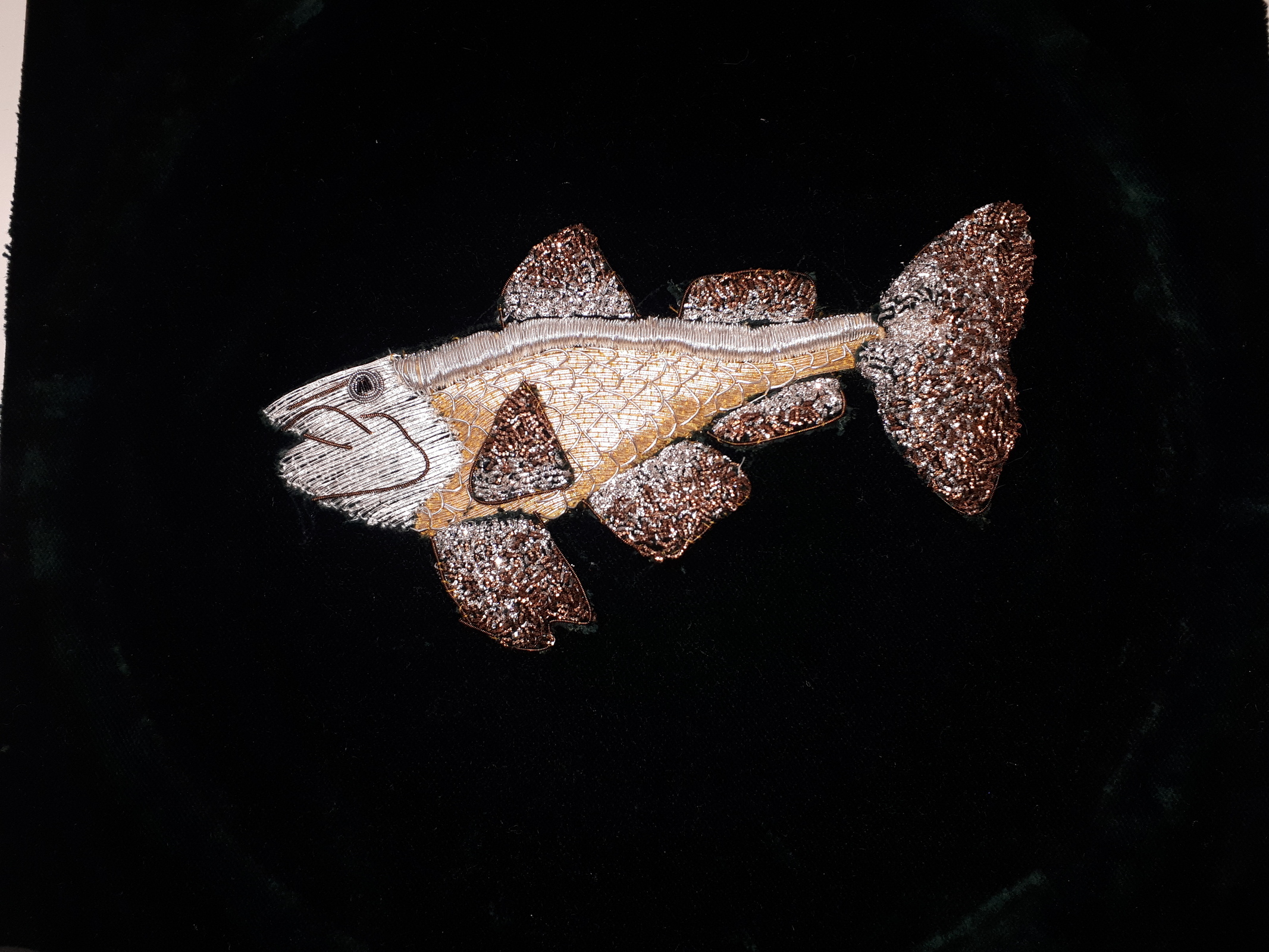 Goldwork was the first class Flo took part in, so this was the first technique she became comfortable and practised in, and is how she became so skilled at putting together these samples in such a short amount of time. Alongside, she also tried her hand at a smaller tambour sample to practise these skills further. 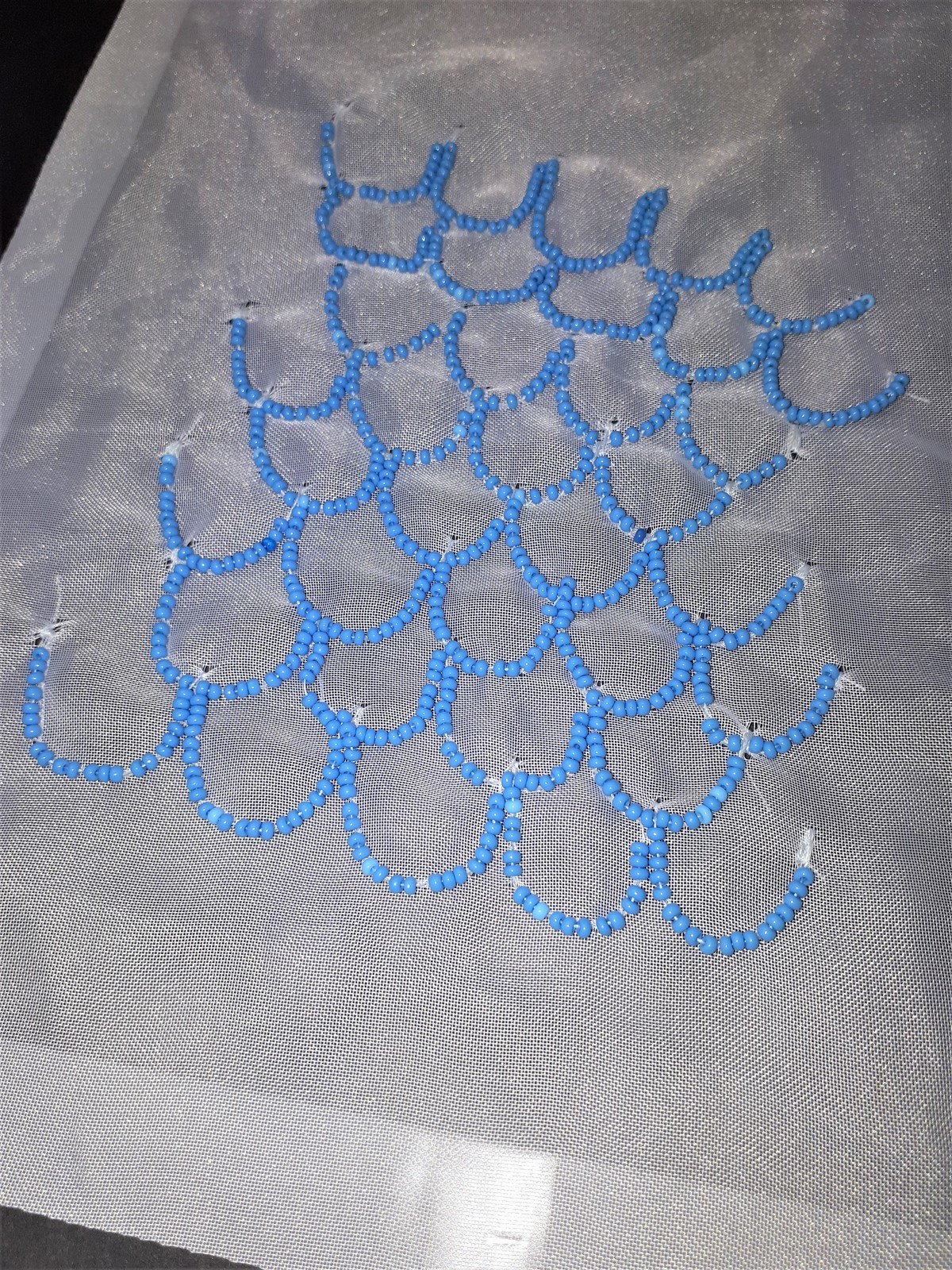 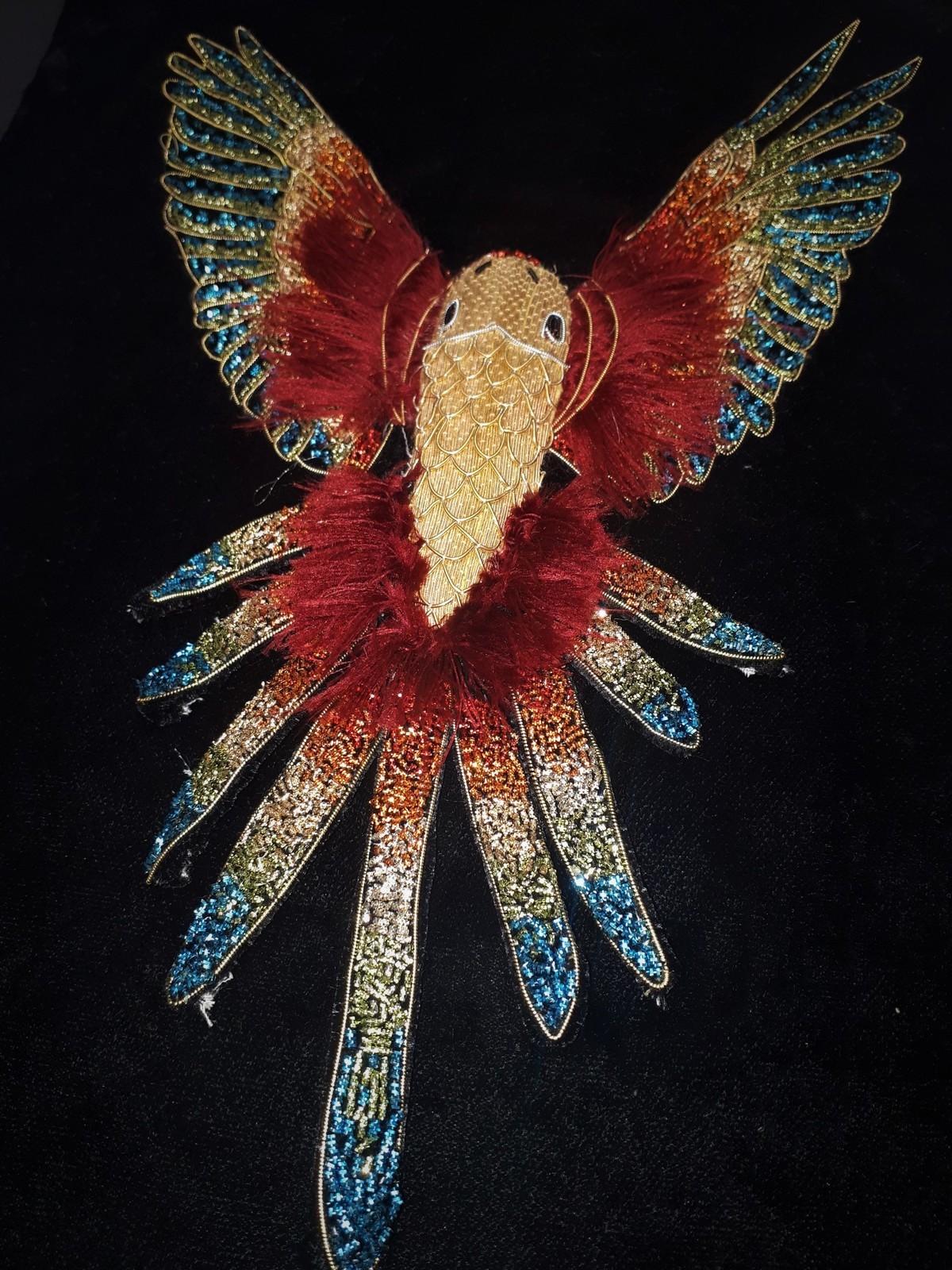 Overall I think Flo has really captured the fun, bright, wildlife inspired themes seen in this years Royal Academy exhibition. You can see the progression through her work and that she has really taken the time to think and plan out what she aimed to archive. This has resulted in these stunning final pieces, full of life and many embroidery skills!

‘A Girl Threading a Needle by Candlelight’ by G. Schalcken

The Wallace Collection is a hidden gem in London’s art history crown, which even this museum buff and lifelong Londoner has only just discovered. Set in a stunning 18th Century building on Manchester Square (just off Oxford Street) it is hard to believe it has taken this long to come across it. Housing some very famous works of art such as Hals’s ‘Laughing Cavalier’, Boucher’s ‘Madame De Pompadour’ and many Gainsborough’s there is plenty to see if you fancy a bit of an oppulent afternoon in the city. For keen stitchers, there are some stunning tapestry works as well as these 17th century wall hangings from Italy featuring lots of goldwork techniques. Now, until the end of August they have upped the ante a bit further by adding stunning couture shoes into the mix.

For a limited time the Wallace Collection is also displaying a selection of footwear superstar Manolo Blahnik amongst their artworks. Unlike many other fashion exhibitions, this is more of an intergration of the shoes in amongst the other art, they sit alongside the permenant collection (sometime on them!) in carefully arranged bell jars. This makes the exhibiton much more intimate as you feel you can get up close to all the pieces on display and all are treated with equal respect.

The selection of shoes in each room has been themed to compliment the artworks they are among. A particular favourite of mine was the oval drawing room where the most decadent shoes Blahnik designed for Sofia Coppola’s film ”Marie Antoinette” are shown amongst the sweet coloured room featuring Fragonard’s ‘Swing’ and Boucher’s ‘Madame de Pompadour’.

From an embroidery perpective there are a few pieces that standout as particulally beautiful. These boots ‘ Lepanto’ (Davee) 2003 look to be a combinations of hand painting and embroidery to a very rich effect.

Of course, there are beads so we couldn’t not mention ‘Zarina’ 2015 which are the very definition of encrusted.

Downstairs is a wall of the original sketches for shoes on display upstairs, showing Blahnik’s distinctive style and flare.

Overall it has all been very respectly done. It is clear from the selection that Blahnik is passionate about beauty and craftsmanship with many skills shown in his designs and revisited throughout the years. There is not much information on each of the pieces, a simple sticker of each one’s name and year leaves you with a few questions perhaps, but lets you enjoy them uninterupted.

‘An Enquiring Mind: Manolo Blahnik at the Wallace Collection’  is on until the 1st Sept 2019, Entrance is free.